A little over a week ago was May 17th, the one national holiday out of the year here in Norway that has nothing to do with religion (there are a ridiculous amount of ones that do have to do with religion). I managed to get myself out of bed for a 10am parade (a big feat for me!) and here is a video I managed to piece together explaining more of the holiday, what I did, and some clips of the adorable parade of children (it also contains an incredibly passionate rant about Eurovision):

As I said in the video, here are some extra pictures to illustrate how the Norwegians spend their Constitution Day:

There were many marching bands of old and young to delight us with their festive music.

Never in my life have I seen so many Norwegian flags before. It is a good looking flag. 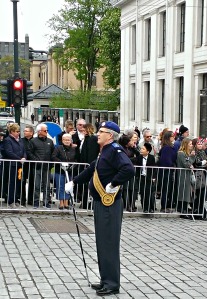 I think he was leading a band. Either way, he seemed quite confident.

A creeper shot of a beautiful bunad (traditional Norwegian clothing). 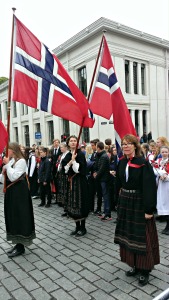 I really enjoyed the bunads. I want one, but they’re incredibly expensive.

The drum cores were actually really impressive to me. As a former band student, I really appreciated the little ones with such dedication.

Such a crazy crowd in front of the palace. The royal family stood out on the central balcony to wave at the people.

I hope you enjoyed that little look into syttende mai. I highly recommend coming to Norway around this time of year to see the country at its highest level of festivities, but be warned: almost everything is closed this day and for much of May due to the many religious holidays. Also on Sundays, that’s a thing here, most things close on Sundays.

I only have about a month left here in Europe, and I’ll be traveling for most of it, so I hope to be able to bring you some nice pictures and information as I go! x.

A writer, an editor, a mental-health advocate, and a traveler. youtube.com/amandamarie59 View all posts by Amanda