Today I am the happiest I can ever remember being.

In my whole life, I cannot remember having a day that was better than this one. Granted, I tend to remember a lot more of the bad days than the good ones. Still, I think this day was so good I will remember it for a long time.

As you can tell by the title, I am currently in Thailand. Chiang Mai, specifically. I’m spending a week here on vacation with a coworker, and we plan to do all of the typical touristy Thai things while here. Today was the start to that to-do list.

Our morning started at 6am, which is the ungodly hour we had to wake up at in order to make our 8am pick-up time from the small tour company my coworker booked us with for the day. Unfortunately, the bus ran a little late and actually didn’t get to us until 9am, but even the knowledge that I could have slept an extra hour couldn’t dampen today.

Our tour (and I should note that by “our,” I mean a group of twelve adults and a two year-old boy) was one of the most stereotypically planned days possible: going to a village in which the White Karen people live (a Burmese tribe that has resided in Thailand for about 200 years), walking through fields and jungle to a waterfall, riding elephants, and riding a bamboo raft down a river. Normally, I would be a bit skeptical of some of these plans: is it really beneficial to a tribal community for me to visit them, or is it trivializing their lifestyle? Is riding elephants ethical, and is the company we’re using at least using humane practices? However, I did not plan our trip, my coworker did, and I have adopted a purely go-with-the-flow attitude about it all. So that’s what I did.

As I’d not done any research, I know very little about the White Karen people. I simply walked around with open eyes and watched as the women weaved scarves to sell and the animals roamed the village in search of food. Our tour guide told us that there are four Karenni peoples in Thailand: the White Karen, the Red Karen, the Long Neck Karen, and the Big-Ear Karen (again, this is all from the tour guide). The people we met with are called the White Karen because the girls wear a white garment until they are married, after which they then wear something more colourful.

Being in that village was the first time since 2011 that I’d been told to go visit with someone who lived with such a blatantly large wealth division from myself. I know my life is very privileged, and that most of the world cannot afford my material luxuries, nor the luxuries of my thoughts Still, it was very humbling to be reminded of that in such an outright way.

After spending some time with the Karenni people, we began the “trekking” part of our one day trekking tour. This was essentially half an hour of walking through agricultural fields, past some adorable elephants, through a forest, and down many stairs that led to a waterfall. We were given half an hour to enjoy ourselves however we pleased. 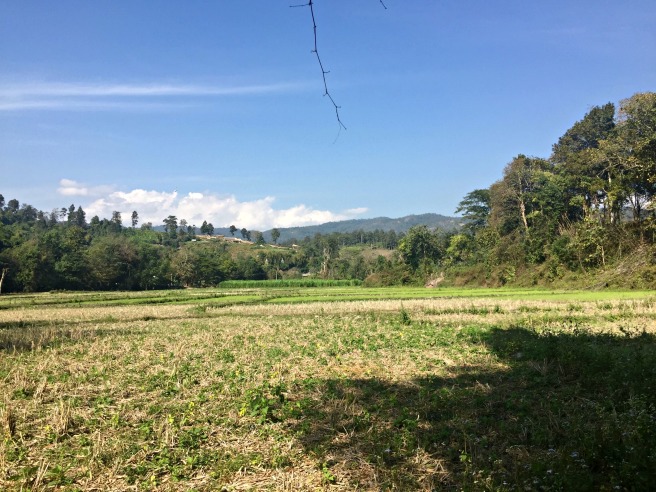 Personally, I love water. You can call it a California stereotype, though I didn’t grow up by the sea. Be it a river, a lake, the ocean, or the rain, water always makes me feel calm, at peace. I enjoyed just being near something as lovely as a waterfall, and, more so, I enjoyed standing on a terrifying bamboo bridge and turning in circles while I took pictures and videos of myself with the waterfall.

After the waterfall, our group went to have the most stereotypical Thai experience of them all: riding an elephant. These elephants looked healthy and happy, though I am in no way an expert on elephant treatment, and I realize that I am most likely projecting my own hopes of their treatment.

First, we spent some time looking at a baby elephant and its mother. Most people reached out and played with the baby elephant as it used its trunk to grab onto their hands, but, honestly, I was a little too scared for that. Don’t get me wrong, I love elephants, but in my love there comes a sort of respect that these are in fact wild animals with the ability to crush me if they so please. And thus, I never touched them.

The policy was two people per elephant, plus a driver who sat on the neck. My coworker and I sat down in this seat on a saddle, tied our rope “seatbelt,” and off our elephant went. My co-worker had ridden an elephant before in Bangkok, but then only for about ten minutes. Today our ride lasted for about thirty minutes, as we were taken through a field, through a river, and back up to shore and around to the camp. 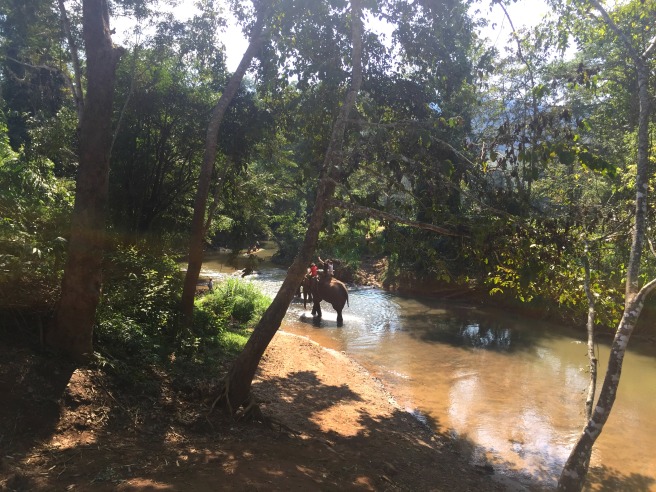 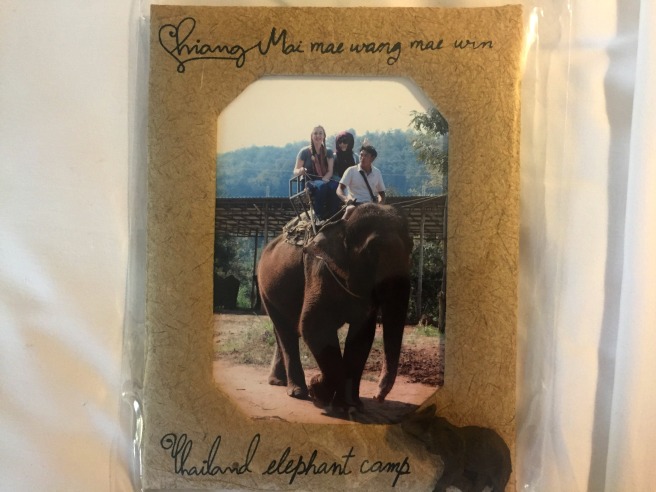 There is something amazing about sitting on top of an elephant as it pulls you through a river. Amazing, but quite saddening.  My coworker and I agreed that we felt bad, and that that would be our last time riding an elephant.

Our last event (after a delicious lunch prepared by the family of our driver), was riding on a bamboo raft. I was a bit worried about the rafting for a couple of reasons: my coworker missed the Korean translation to “raft” by a bit, so we our jeans weren’t exactly ideal attire for this particular activity; and I get terribly seasick on all forms of water transportation. Despite both of those concerns, bamboo rafting ended up being the highlight of my day.

At four people to a raft, my coworker and I sat with a nice couple from Canada on a raft driven by what our tour guide described as “the craziest driver,” and crazy he was indeed.

Our raft driver was a young man who was a lot stronger than he looked, and who insisted on bouncing his bamboo stick in the water to scare the people on the raft ahead of us as he steered us towards them. It was a race between the two rafts, and we quickly overtook our competitors (at which point I said “bye bye” to their driver and splashed all along my backside for it).

After establishing a clear lead, our driver (that seems like a very weird word to use but I’m at a loss for a better one), who had been splashing me occasionally due to the incessant smile plastered on my face, asked if I wanted to try steering the raft. Before I could answer, my coworker, who was sitting in front of me, immediately shouted “no, we’ll die!” So, naturally, I said “yes.”

Let me tell you, steering a raft is not easy work, and it reminded me of how much I need to work out. Upon first giving me the bamboo stick he uses to propel us and keep us from hitting rocks, our driver moved to the back of the raft, but not without falling into the river. I’m rather convinced he did that on purpose (I wasn’t even steering yet! It couldn’t be my fault!). For a few minutes, while he then stood in the back relaxing and sometimes taunting the raft far behind us, I struggled to propel the raft forward by sticking the bamboo pole into the soft bottom of the river and pushing as much as I could, making sure to also use it to push us away from the many rocks on the side.

It was difficult and I kept asking him why I was doing his work while he relaxed, but it was also a lot of fun. My time steering came to an end as I both called him over to take back his post aand lost hold of the bamboo pole (it got caught on a rock or the raft or something…), and stepped into the river myself on accident…I had to race the raft forward to grab the bamboo pole and then pull myself back on the front of the raft, where I then sat by the young boy who had resumed steering us with the most energy I’ve seen in any person that’s already gone through puberty.

He took us down some rapids and continued to splash me (because he fell in, so I was not wet enough), and everyone seemed to be having a good time. There was a small scare when we saw a small snake in the water (the Canadian couple and I weren’t concerned, but my coworker just about had a heart attack) but in the entire forty or so minutes that we were on that raft, I never stopped smiling – a fact which was pointed out to me by the driver. 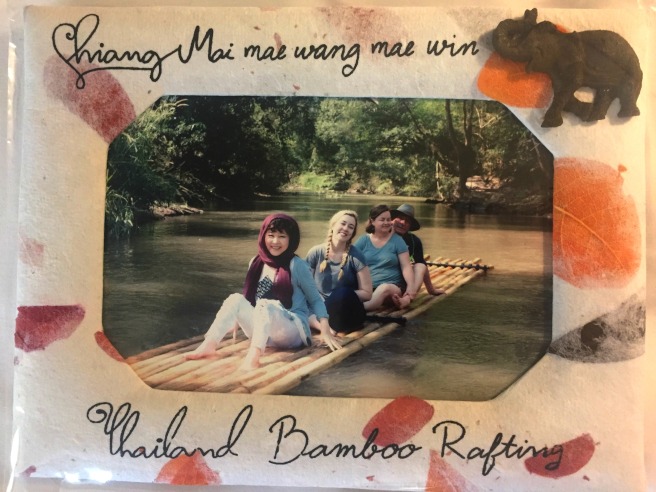 And that’s it. That was my day. I met some Karenni people, I hiked to a waterfall, I rode an elephant, and I had a really fun ride on a bamboo raft. After that we just piled back into the van and went back to our separate hotels, and that’s where I am now, sitting in my hotel room, eating cup ramen (going to get food was just too much work for us…), and typing this up. And I’m still so happy.

Thank you, lovely Karenni people. Thank you, elephants. Thank you, hilarious tour guide that called us all “my friend.” Thank you, nice Canadians, French people, and Spaniards that accompanied us. Thank you, my wonderful coworker. And thank you, crazy bamboo raft driver who has too much fun at his job.

I wish the rest of my life could be like this.

(Edit: I do not condone riding elephants. It involves awfully inhumane treatment of these wonderful animals for the benefit of others. This was an accidental part of my trip that will not be repeated. Rather than riding them, I suggest taking a day trip to volunteer at a rescue and conservation centre, or donating to one.)

A writer, an editor, a mental-health advocate, and a traveler. youtube.com/amandamarie59 View all posts by Amanda

One thought on “Thailand: Day Two”